For one scene in my latest film I decided to interview myself, on the subject of narcissism – just because I thought there was some ironic humour in doing so. And to add a little something to that interview, besides the voice clearly being the same voice asking and answering the questions, I decide to duplicate myself placing the audio recorder down for the interview. My idea was to kill two – or three – birds with one stone, by adding some depth to the joke by showing myself twice, to further sell the documentary feeling by having the recorder clearly placed in shot, and then to sell the effect by having the interviewee move the recorder once the interviewer placed it in the shot. I am particularly happy with how this effect turned out due to its subtlety, and how easy it was the achieve.

First, I’ll take you through the practice elements of creating the effect, then I’ll go through the simple compositing techniques I used, and finally I’ll explain how I did the VHS tape – which was pretty simple to do practically, but could also be done using VFX, if you don’t have access to a working tape recorder.

This is not necessarily the best way to create this effect, but it is an easy way to do on your own, and with little equipment – just a camera, and tripod, an audio recorder, and a video editor that supports masking, like Premiere Pro from Adobe.

This effect – minus the recorder – has been covered in many videos on YouTube, so if you are unsure about how to do any of the things mentioned here just look for character duplication on YouTube, is much easier to show the process rather than tell it, so this is mainly for those who roughly understand how the effect works, but are having trouble making it look real.

Creating the VHS tape was quite simple. All you need to do is burn a DVD version of the film, play the DVD through a TV that has a tape recorder attached, hit record and let it play – hey presto you have a VHS with the effect on. If you then want to record this back into the computer to get this old documentary look you’re going to want to mask around the screen – once you have your footage of the TV, of course – so you’re able to colour grade the TV separate from the rest of the scene, this way you can really make the screen pop out from the background.

If you can’t your hands of a VHS recorder, just record the screen with nothing on from a tripod to make compositing easier, then mask out that part of the video, add your effect underneath, add Red Giant’s VHS effect (from Red Giant Universe), duplicate the layer with the effect, scale it up a little, add a lot of blur to the layer – so you only have a vague sense of the colours of the scene – mask that so it only applies to the area immediately around the TV screen then tune the opacity to however looks right to you, to create the illusion of light spilling from the TV – you can also change the blending mode to ‘soft light’ in the opacity controls, which will help to sell the effect. If you can get the effect onto the TV, but don’t have a tape to record it onto, you could just record that on a tripod, then record another version in which a tape is pushed in, then cut from one to the other once the tape goes in and would be playing. You could also mask the TV screen and add Red Giant’s VHS tape effect, to make it look a little dirtier.

To learn more about character duplication check out this video from Film Riot.

Hopefully this was helpful, I’ll be back soon.

Recording the wind is often a boring task, but I wanted to create something a bit different with my recordings. Using pipes of different length to record through, I could use the natural acoustic qualities of the pipes to manipulate the wind into something a little more musical, each pipe creating a different note, I can mix and match the notes to create the ideal sound for the wind in my piece – I can also use pitch shifters to tune the sounds to one another. I used four pipes: one metal, one cardboard, and two PVC pipes of different lengths. I spend about an hour recording sound in the college courtyard. I’ve included a little recording that includes some talking and some of the pipe sounds. 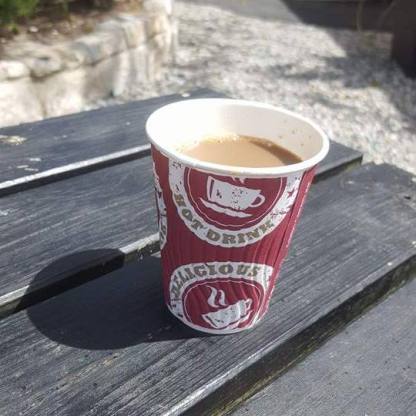 Due to my love of writing poetry – I would say ‘songs’, but I’m no singer – I decided to experiment with writing and recording some words inspired by The Willows. This (below) is what I came up with after about a day and a half.

Disregarding the rowing sounds at the end, and the flute – though it’s barely recognisable – this track is made up of six voice recordings. The recordings are each in a different location within my bedroom; they were recorded with a pair of Rode M5s, in a cross pattern (see sketch below), into a Zoom H4N.

I decided to record the vocals using several positions – there were eight recorded – for three reasons: one, I wanted to take advantage of the change in vocal quality from whispering near to the microphone and talking from a distance; two, I wanted to use the different acoustic qualities of the microphone positions to create a sense of space; three, I wanted to be able to analyse and compare these recordings in order to better understand the way in which source position effects a recording, so I may imitate 3D space more accurately in my finished piece.

Once I had my recordings I brought them into Adobe Audition, captured a noise print, then applied a batch noise reduction to all the files – just a very light reduction of the self produced noise from the Zoom.

Once denoised I brought them all into Ableton Live (below). Each voice was given a track, then I used an EQ to accentuate the acoustic qualities of each recording position – bringing up the low vocal frequencies in the close recording to accentuate the proximity effect, etc. Then each voice was given a position, the left and right recordings were pretty straightforward. Once this was done I warped each sound slightly, and cut pieces of silence between lines, until I found a synchronisation I liked – having the whisper first and the further recordings happen a little later, all in the hope of accentuating space.

Once a simple mix was established I then worked on each sound individually, I’ll take you through the process on the closest voice – the whisper – as that’s the sound with the most work done to it.

Firstly, this voice was positioned in the left of the stereo mix, I felt it needed to be predominately coming from one side to sound like an external voice, as opposed to a voice in your head. I also wanted to keep the voice sounding as though it was moving slightly closer; to do this I had the sound move from the left to the right, very subtly, and then resetting between lines. Secondly, I needed to EQ the voice with the movement I wanted it to make. As you can hear at the end of this test, the voice moves slightly overhead and from the left to the right. To achieve the attitudinal movement I used an EQ to bring out some of the higher tones as it moved from left to right, I also used a volume control to drop the level of the sound to give a sense of distance between the listener and the sound as it moved overhead.

As you can see, not a lot was done to each voice – no reverb or chorusing effects – but the method of recording in several positions allowed me to create an interesting effect, that could be easily manipulated just using the volume and panning of each track.

So, having a lot of ideas about what I wanted my piece to say, I took to learning how to say thing with this new medium I’ve become interested in – sonic art, particularly electroacoustic music. My first experiments were in Adobe Audition, however I had to abandon that piece of software as automating the individual parameters within different effects is incredibly time consuming – it’s clearly not designed for a non-destructive automation workflow. I’ve been getting to grips with Ableton Live for the last few days, and it’s incredible intuitive. In this post I will be discussing my process using this software to transform sounds I obtained from Freesound into the piece you can hear below.

This (above) was my forth attempt at building The River (see other post on The Willows and my FMP). In this iteration I cause it to morph into the sounds of a road towards the end. I am quite happy with the result, though I feel the white water stage isn’t present for long enough and doesn’t properly assert itself as a stage in the lifetime of the river. This isn’t the exact transformation the river will take over the course of my finished piece – nor are the sounds necessarily the ones I will be using – but it was a chance to practice.

The process – step by step, sound by sound 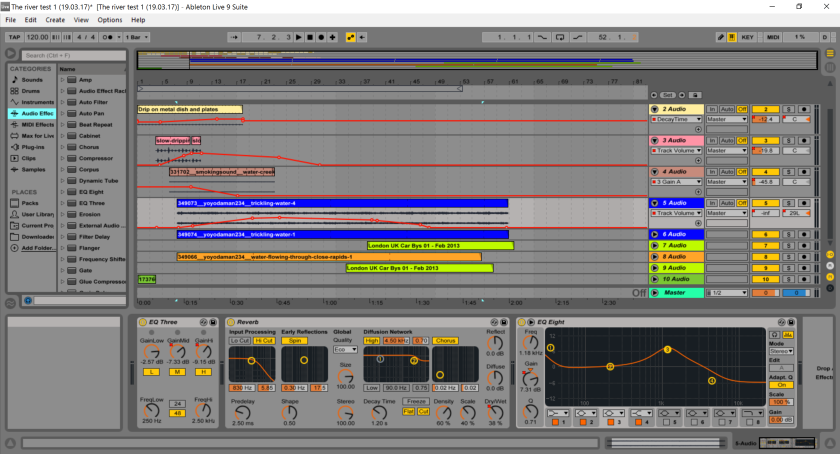 As mentioned in my blog post (‘eight’), this is a breakdown of the key events in ‘The Willows’, with specific attention paid to the descriptions of sounds within the narrative. This breakdown is based on emotional changes, physical occurrences, and descriptive changes in the narration.